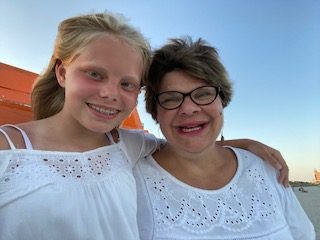 Rev. Dawn-Marie Singleton is the lead pastor at Cherrydale UMC. She came to us with her daughter, Sarah-Grace in July 2020. A native of Northern Virginia, Dawn-Marie graduated from Atlantic Christian College (now Barton College), where she earned a Bachelor’s degree in English and a minor in Religion. She earned her Master of Divinity degree from Duke Divinity School, Duke University, in Durham, NC. Ordained in 1993, she has been appointed in the Virginia Conference for 28 years. Before coming to Cherrydale UMC, Dawn-Marie served as the Director of Youth/Associate Pastor at Trinity UMC (Alexandria), Associate Pastor at Aldersgate UMC (Chesapeake), Senior Pastor at Kernstown UMC (Winchester), Keezletown UMC (Harrisonburg) and Oakton UMC (Oakton). Dawn-Marie loves spending time with her daughter, being in nature, photography, writing – both poetry and journaling and is currently writing a novel on kindness. She enjoys scrapbooking, swimming and gardening. She has a passion for youth, spreading God’s love, sharing random acts of kindness and wants to be sure everyone knows they are loved and valued by God.

Hello! My name is Bailey Jones and I am so excited to be a part of Cherrydale UMC! I graduated from Shenandoah University magna cum laude in 2020 with a degree in History Secondary Education. However, I felt that God was calling me to help youth in more ways than just teaching. I attend Wesley Theological Seminary and am on the Deacon track so that I may fulfill this calling. I am a Community Engagement Institute Fellow and am working on a project that involves mentoring justice impacted youth in and out of the system to break recidivism. I am so excited to work and have fun with your youth during weekly meetings, on mission projects, and more!

Angelina Shumway graduated from the University of Maryland, College Park with a Master’s degree in Vocal Performance and received a Doctoral degree in Musical Art in Vocal Performance from the Catholic University of America. She is an accomplished classical choral conductor and singer, having performed in Oratorios, Operas and has given many professional solo appearances with various orchestras. She collaborated with orchestras and choirs performing soprano solo roles in Oratorio including Creation, Messiah, Elijah, Requiem, Gloria and more. She has given hundreds of benefit concerts, fundraising recitals nationally, performed at the Kennedy Center, and the Smithsonian Institute in Washington DC to name a few.

Dr. Shumway began playing the piano when she was three years old and has played the organ for church services since thirteen. She has been professionally serving various churches as the director of the Music ministry for over thirty years and has given several Praise Worship seminars in Canada and United States.

Not only she has been active as a professional musician, she has also been an educator for more than thirty years. She has worked as the Korean language, and History/Culture teacher at Korean School of Greater Washington, and served as a Program Director at Korean Community Service Center. She also has been active in Korean American Community as a Lecturer, mentor, and the main speaker for many seminars, mentoring, and intervention programs for youth in Washington Tri-state area.

As a Music Educator, she was a voice faculty at Shenandoah University and has been a faculty member at Prince George’s Community College since 1993, starting as the instructor for the SAGE program, and in 2004 Dr. Shumway began teaching the music credit program at the college. She has been serving as the Associate Professor of Music since 2010, and Academic Coordinator of the Music Department at Prince George’s Community College since 2013. She has been actively involved with The Maryland Area Colleges of Music Association (MACMA ) since 2014 and has been serving the organization as the vice president since 2016.

Mark Irchai (b.1996) is an American-Russian pianist and conductor. His concertizing has taken him across the United States and Europe, where he has become known for his diverse musical programming and multi-colored sound. He’s already received numerous awards, including 1st prizes at the XIV International Orfeo Music Competition, the George Mason University Concerto Competition, and the Golden Classical Awards International Music Competition. Most recently, he was awarded the Newton Swift Award in Collaborative Piano by the Mannes School of Music. Highlighted performance venues include Weil Recital Hall at Carnegie Hall, Steinway Hall, George Mason University’s Center for the Arts, the Embassy of Turkey to the United States, and two appearances at DOROT for their inaugural concert series for survivors of the Holocaust.

Equally comfortable in both solo and collaborative work, he’s performed with many orchestras and in collaboration with several singers and instrumentalists. Ensemble appearances as conductor and soloist include joining soloist the Mason Symphony Orchestra, the Mason Wind Symphony, and the Piedmont Symphony Orchestra. He’s also appeared as collaborative pianist with artists like Vasilisa Berzhanskaya, John Aler, and Marlisa Woods.

Mark holds a BM in Piano Performance from George Mason University, where he studied piano and chamber music with Anna Balakerskaia. He also holds an MM in Piano Performance from the Mannes School of Music, where he studied with Simone Dinnerstein. He has appeared in masterclasses with artists such as George Li, Awadagin Pratt, Claire Huangci, and Richard Goode. He studied choral and symphonic conducting at George Mason as well as at the International Academy of Advanced Conducting after Ilya Musin. Mark is currently on faculty at the Levine School of Music in Washington DC, at the Moon School of Music in Fairfax, VA, and teaches privately both virtually and in-person from home in Alexandria, VA. For more information, please visit https://markirchai.com.

Julie Wright holds a BS in Business Administration degree from Wittenberg University and an MBA from Pittsburg State University. She is retired having two previous careers – corporate controller for several mining and manufacturing companies and the Chief Communications Officer for the Arlington County Chapter of the American Red Cross. She has two daughters who are married and live in N. Virginia and two grandsons. She also serves as Treasurer of the Kiwanis Club of Arlington.

Mitzi Holder has been Cherrydale United Methodist Church’s Administrative Assistant since August of 2015. She served in the United States Air Force for 12 years in a computer career field. She completed her Associates Degree in Computer Information Systems in 2003. Mitzi is a single mom who loves riding the scary park rides and going to the beach with her teenage son.